Here is a link to John King’s obituary:   http://forest-funeralhome.com/obituary/john-m-king

Here is a link to Mike Kennedy’s obituary:   https://www.andersonstributecenter.com/memorials/michael-mike-kennedy/4662356/

In 2020, we lost Alene Dunlap Thille in June and Stephen Gosson in September.  Our Memory Page has been updated for both of these classmates.

Classmates previously listed in Class News that have passed away in 2015-2019:

We previously listed for 2019 in the months of February, May, June, July, September and November six classmates have passed away.  Arthur McGuirk in February, Clay Smith in May, Barbara(Babs) Garrison Watkins in June, Linda Gahimer Miller in July and Chris Herrick in September and Mike Reynolds in November.

Our  Memory Page  has been updated for each of these classmates.

We have recently learned from his wife, that Charles Bushman passed away on January 12, 2016 in Woodburn, OR. Charles has been added to our Memory Page

Christie Webber Roy passed away on December 6, 2017 in The Dalles.  Christie has been added to our Memory Page

Mary Swaim passed away on February 22, 2017 in Oregon City.   Mary has been added to our Memory Page.

We have recently learned that Patricia Herbert Frick passed away on February 27, 2016.  Patricia has been added to our Memory Page.

We are also saddened to report that John Olmstead, Eagle Scout and Vietnam veteran, passed away on January 3, 2017 after bravely battling diabetes for 50 years.  John has been added to our Memory Page.

Doug was in Bremerton, WA at the time of his death from cancer.  Services for Doug Miller will be on April 9th, 4 p.m. at the Olympic Evangelical Free Church in Poulsbo, WA.  As you may remember,  Doug was unable to attend the 50th reunion.  So we held a gathering in The Dalles for Doug on November 7th, 2015 for those classmates that could attend and wanted to say hello to Doug.  Doug has been added to our memory  page.

Al Prante died at home in Wahkiacus, Wa.  At this time, we are not aware of any services planned for Al.  Al has been added to our memory page.

Patty passed away suddenly in Grants Pass, Oregon on October 27, 2015.  Just one month ago, Patty was in The Dalles enjoying the weekend with everyone at the 50th Reunion.  Patty has been added to our Memory Page .

Cheryl passed away on September 5, 2015 in Kent, Washington.  Cheryl has been added to our Memory Page .

David passed away in July 2014.  His obituary is posted on our Memory Page .

Bruce, an unforgettable friend and classmate, passed away on May 5, 2015.  Please read the obituary of his extraordinary life by clicking here to go to our Memory Page.

Sandra Lee Connelly passed away August  19, 2016 in Hood River, Oregon.  Sandra has been added to our Memory Page

David Freeman Gregory, 69, died at Lake District Hospital on Friday, Oct. 16, 2015.  David has been added to our Memory Page 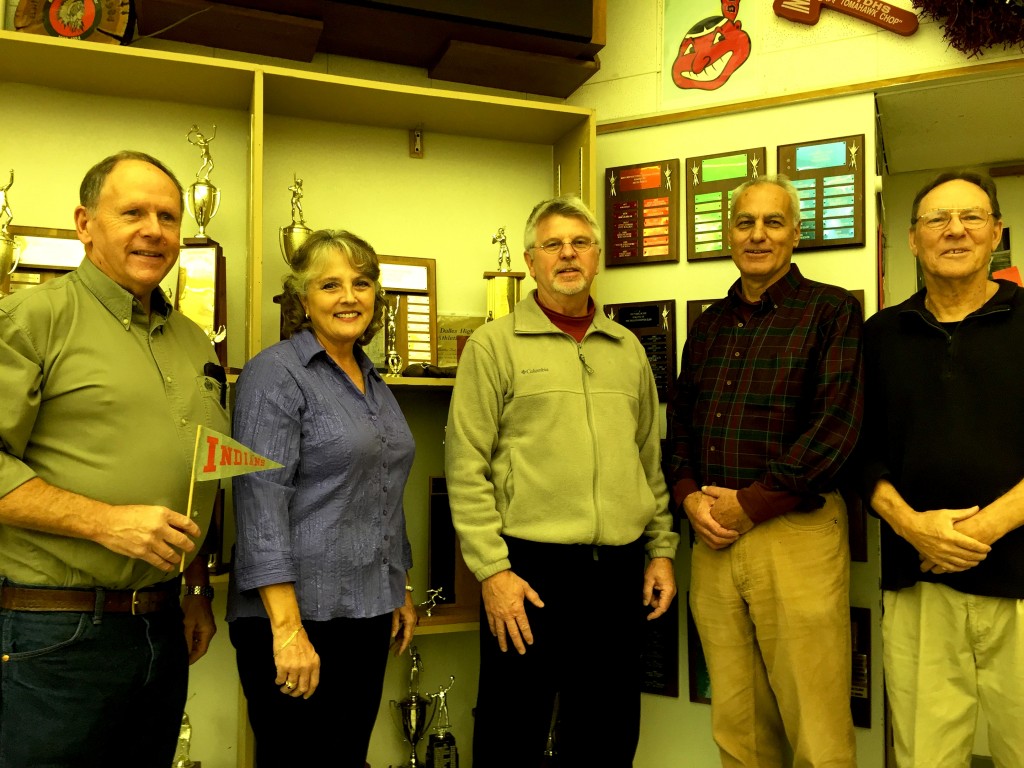 Members of the Class of 1969, Lloyd Clark and Regena Carrico (on the left)  met with Principal Nick Nelson (center) and Alumni Association Officers John Moore and Mike Elston (on the right) at the The Dalles School District’s Archive Museum on Saturday to donate  $600.00 to The Dalles High Schools Alumni and Friends Association, collected  at their class’s 45th reunion.

With the donation, the 1969 group will join a growing list of classes from both The Dalles and Wahtonka High Schools that have come together to support the students of today’s school. Elston said we are asking each class to become a member of the association by donating $50 or more per year, individuals of the classes can join for free.  Elston added “the alumni association is unique in that the web site for the group is run entirely by high school students who also receive credit for their work thanks to Principal Nelson and Superintendent Armstrong. Over the last year, the students have taken the web project from an idea and made it into a dynamic ever improving  site. It contains links to the local paper and school district. They have added alumni profiles and reunion information besides class registration.  Unlike for pay sites, the membership money will come back to support the school.  Principal Nelson will meet with the group each year to decide how the money will be used to improve and create programs to benefit all the students.

Mr. Clark said he would like to challenge other classes to meet or beat the 1969 class donation. He added this is an important program that gives the students real life experience, and  provides the high school with much needed voluntary community support.

Moore hoped that the local alumni would go to the web site register and tell their classmates to do the same.

The web site can be viewed by simply googling The Dalles High Schools Alumni or www.thedalleshighschoolsalumni.com

Donation can be made two ways:

Class membership and non tax deductible donations can be sent to:

Individual tax deductible donations can be made to:

If you have information you would like included in the next edition of the newsletter, please email info@tdhs65.com.